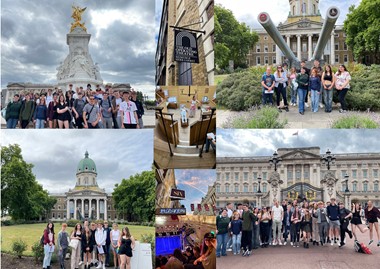 Today students enjoyed a very full day exploring some of the most fascinating but deadly moments in history,

The day began with a visit to the Imperial War Museum. Students toured in small groups the First and Second World War galleries whilst being introduced to a range of artefacts that demonstrated the impact of war on men, women and children. Everyone found it thought provoking and were sad to be moving on from such an incredible museum. In the afternoon we journeyed back in time to St Thomas’s Old Operating Theatre and experienced an 19th Century operation in all its blood and gore. After a quick stop off at Buckingham Palace it was time for history in the theatre. Six the musical is both a retelling of the story of the wives of Henry VIII and a chance to hear their side of the story! A great way to let of steam after such an action packed History day!