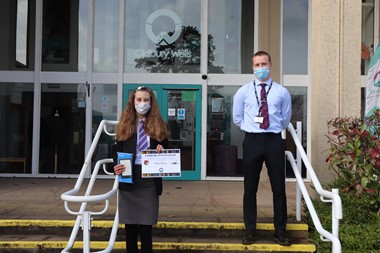 Congratulations to Maisie Rollings for her excellent review.

Over the lockdown period, we launched a whole school book review competition on Satchel One as part of our ‘Wellbeing Initiative - Read and Relax Tuesday’. Students were invited to write a book review on any book of their choice. We had lots of entries submitted to us, which were kindly read and judged by our school governors. We are pleased to announce that the winner of the competition was Maisie Rollings in Year 8. She was awarded a certificate and a Kindle by head of year Mr Cook. Well done Maisie for your fantastic work.

Stanley Yelnats is sentenced to spend time at Camp Green Lake after being wrongly accused of stealing a pair of trainers. But Camp Green Lake isn’t what it seems. It is a Juvenile Detention Centre where all the boys are made to dig holes, 5 foot deep and 5 foot wide. They are told that digging will build character, but Stanley soon finds out that isn’t all they’re digging for. Escaping from Camp Green Lake with his friend Zero, Stanley relives the troubles his grandfather faced when left stranded in the desert, in a quest to safety and freedom. Along the way, Zero reveals a shocking truth, but to make it out alive they must stick together. And who knows, maybe their paths had crossed before, many years ago.

This was my first time reading this book. It isn’t usually the type of book I’d go for but after hearing lots of amazing reviews and running out of books at home, I decided to give it a go. I love the plot; it is so unique and different to any other books I’ve read and you never know what’s going to happen next or what someone’s going to do. I never knew that you could write a book about something as simple as holes and yet still make it so exciting. I think the characters are relatable to everyone, even though we aren’t all criminals, because who hasn’t been at the wrong place at the wrong time and been accused of something they haven’t done? I also really like the creative names given to the characters, such as Armpit, Squid, X-Ray, Zigzag and Magnet.

The reason I only gave it 4 stars instead of 5 is that for me the language was a bit simple and I think it would probably be more suitable for younger children. Also, it kept switching between what was happening in the present to Stanley and what had happened to his relatives in the past. I liked seeing how the paths of both stories kept crossing but it was slightly annoying as they seemed to keep swopping randomly and it meant that at each chapter, you didn’t know which story you were going to be reading about next. This is just a personal preference; I know some people liked this element of the book. I like the idea of it but think it could have been implemented in a more structured way.

I think recently a sequel was written to Holes called Small Steps which I haven’t yet read, but it would be interesting to see which characters it follows or if there are all new characters, and it just uses the same setting of Camp Green Lake. I would recommend this book to children aged around 9-12 who have a sense of adventure and I think it would be a good book to encourage boys to start reading. It would also be a good book to use for guided reading at primary school and to discuss as a class.